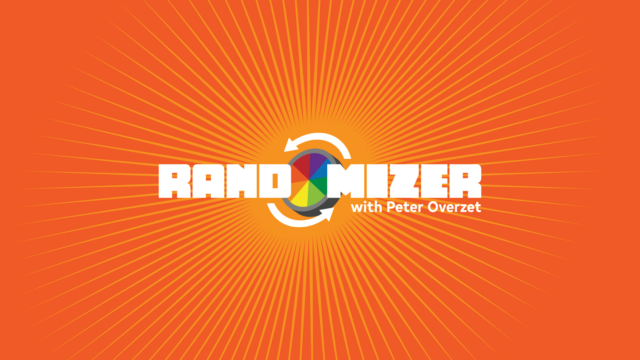 Imagine a fantasy draft where instead of simply selecting the best player available you have to make a pick blindfolded or sing a David Bowie song on the spot before making a selection? That’s a Randomizer Draft.

Randomizer Drafts are a fantasy football best ball draft where instead of drafting the best player available each round, Peter Overzet and his guest must quickly make selections based on wild, fan-suggested prompts that are randomized on a wheel. It’s the most chaotic and frenzied way to draft a team. It’s also a recipe for drafting a truly disastrous team in the most entertaining way possible.

Whether you are at the beach or at your desk, the Randomizer Merch Box has you covered this summer. It’s got everything you need to stay relaxed and chill while drafting at the beach or during stressful shows where Pete forgets to spin the wheel and times out.

What is a best ball draft?

Oh, should I back up even further? Best ball drafts are fantasy football drafts where the participants do not need to set their lineups, do waivers, or make trades after the draft. It’s “draft it and forget it.” During the season, your starting lineup is automatically set for you based on your top performers.

For instance, if you are playing on Underdog Fantasy, there are 18 roster spots, but only 8 starters (1 QB, 2 RB, 3 WR, 1 TE, & 1 FLEX). At the end of each NFL week, Underdog automatically selects your highest scoring players at the designated positions to be “starters” and only those players’ statistics over that week are counted towards your accumulated score. If you drafted 2 QBs and Russell Wilson scores 28 points and Matt Ryan scores 26 points in Week 6, Wilson’s 28 points will automatically be placed in your starting lineup and Ryan’s score won’t be used.

In a traditional 12-team format, the team with the most points at the end of the NFL regular season wins. However, best ball tournaments have different playoff structures to determine the winner. Underdog’s Best Ball Mania II tournament has a $1,000,001 top prize for the 2021 season and features 3 playoff rounds Weeks 15-17 where only the top teams in each round continue to advance.

This form of drafting has become incredibly popular in recent years as it allows fantasy players to draft as much as they want without the time commitment of managing the teams in season.

You can get a FREE $25 entry into the Best Mall Mania for your shot at a million dollars if you use Promo Code ‘Pete’ when you deposit on Underdog Fantasy.

What is a Randomizer wheel?

The Randomizer wheel is exactly like it sounds. A wheel with a variety of prompts that spits out randomized results for each draft pick.

Sometimes the prompt will dictate that we draft a player under 6’0″ tall and other times it will make the guest belt out the Saved By The Bell theme song:

Who hosts the Randomizer drafts?

Peter Overzet—a comedian, streamer, and writer—hosts the Randomizer drafts. Although the show is ostensibly a fantasy draft, in reality the Randomizer streams are comedy shows masquerading as fantasy content. Peter hand selects the prompts to maximize getting to know the guest in the most entertaining ways possible. If you have any interest in the NFL, fantasy football, or comedy, you’ll likely enjoy the format.

Who are the Randomizer guests?

Randomizer guests come from all across the fantasy football sphere—from analysts like ESPN’s Matthew Berry and The Fantasy Footballers to Hollywood actors (Tom Everett Scott) to WSOP Main Event champs (Scott Blumstein), the Randomizer guests are an eclectic bunch of personalities.

What are Randomizer prompts?

When the Randomizer drafts first launched, the suggestions included simple prompts such as:

However, over time the prompts have evolved to be more challenged-focused and guest-specific. The best prompts play into the brand of the guest and force Peter and the guest to scramble.

Get involved with the Randomizer show

Randomizer prompts are largely generated from viewer suggestions in the Deposit Kingdom Discord and on Twitter the day of shows.

By becoming a “Randomizer Royalty” member via Pete’s YouTube, you get access to the #randomizer channel within the Deposit Kingdom discord and custom VIP badges and emotes during shows. YouTube members also get priority access to be in the Randomizer drafts. The link is shared a few minutes into the start of each show.

When are Randomizer drafts?

Randomizer drafts are every Thursday evening at 8 or 9pm et starting after the NFL draft up until the start of the season. You can watch them exclusively on Peter Overzet’s YouTube channel.

How do I get on the show?

There are two ways to become a guest on the Randomizer show. 1) Be a funny and entertaining personality who likes fantasy football or 2) Buy a Randomizer Box that comes with a smattering of fun merch (koozies, coasters, shot glasses, bottle openers and more), along with raffle tickets to be a featured guest on the show. Peter draws winners monthly throughout the show’s seasonal run.

A Guide to the Deposit Kingdom Discord